Phew, well I am glad that one is over…will be the view of many! Yes, it was a long drawn out vintage and on the edge, but there will be some stunning wines.

What was the Flowstone story in vintage 2017?

Coming out of a wet winter and a cool and wet Spring, the season was already running 3-4 weeks behind the timing we have become used to over the last 5-6 years; bearing more similarity to what was considered the norm 10-12 years ago. In addition, the vines this year decided to carry some significant crop loads; further exacerbated by the extra moisture in the soil leading to the vines taking up more water than normal. This resulted in larger than normal berries; ergo, the crops were even larger again.

The opportunists were excited about the large crops, while the quality focussed diligently crop thinned. The Flowstone vineyard was crop thinned twice: early in the season to encourage even shoot growth and at veraison, to fine tune the crop load and to take out late ripening bunches.

January and February were fine and even though the season was late, everything was looking good and missing the late Feb 100mm of rain that we had in 2016.

Harvest of the Flowstone Chardonnay started on 10th March and the Sauvignon Blanc on 20th March. The fruit was clean and with good flavour and ripeness, while retaining high-ish natural acid. Gewurztraminer was harvested on 13th April (a birthday present for me) and shows great flavours and even more finesse than usual. The Savagnin (for Moonmilk), was harvested very late.

And the reds slowly ripened…the cool season meant this was a slow process indeed. The usual Indian summer was needed…

But then, in late March, 50 mm of rain over two days! The reds were on the edge and further rain would turn them into slush, leaving the red vintage a disaster. Fortunately, the whole of April was virtually rain free (pretty much unheard of in this part of the world) and the reds could slowly ripen in the moderate warmth of Autumn. This prolonged, ripening phase allowed the flavours to develop beautifully, with the tannins softening and integrating.

Our Cabernet was harvested on 11th April and the Touriga on the 12th April. There were a lot of red grapes in the region that weren’t harvested until near the end of April. I was certainly glad we crop thinned. 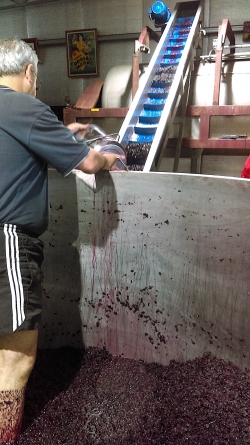 Vintage is well and truly over now and in retrospect it was a vintage on the edge, but the results will be fantastic for Flowstone: whites with purity and vibrancy and the reds with stunning concentration, beautifully soft tannins and fantastic mouth feel.

…it was worth the tension…. 2022 Vintage: How it’s shaping up in Margaret River

From my Margaret River vineyard home to yours. Here’s a quick video update from Stuart Pym on how the 2022 vintage is shaping up here in Margaret River. Stuart’s summary of 2021 Vintage in Margaret River and a sneak peek at how the wines are shaping up. A coolish spring and early summer pointed to a slightly later than usual vintage, but it was very dry, and things were looking very promising.